Boilermakers erect and repair boilers in office buildings, industrial plants, apartment complexes, schools, warehouses and other structures that still use steam as a heat or power source. Boilermakers also commonly worked aboard Navy and commercial ships that used boilers to power the vessels and on-board equipment.

The extensive use of asbestos, especially in older boiler systems, makes the occupation of boilermaker a particularly high-risk job for asbestos exposure even in the 21st century. Though the government began to regulate the use of asbestos in the 1970’s, there are thousands of boilers around the country – many built half a century ago – that remain contaminated with asbestos. Boilermakers exposed to asbestos are at risk of developing asbestos-related diseases, such as mesothelioma. Asbestos Exposure in the Boiler Industry

Subject to extreme temperatures, asbestos materials erode and break down over time. Boilermakers regularly replace boiler components by chipping away at the damaged asbestos, prying it loose with hand-held tools or welding torches – unknowingly releasing poisonous dust. This work is commonly accomplished in hot and cramped spaces, like basements and the tight lower decks of ships, where potentially lethal dust can accumulate. Not knowing to protect themselves, many boilermakers could have breathed in deadly asbestos fibers, or brought the asbestos dust home on their clothes, exposing family members to the dangerous toxin as well. 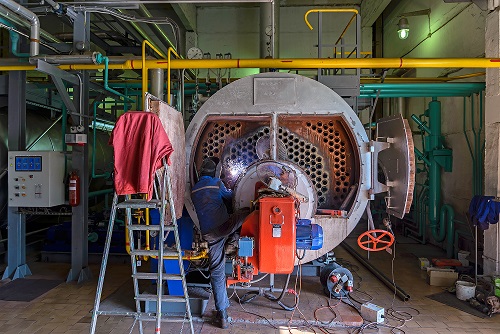 Because of its fire-resistant qualities, asbestos was used as the main heat-insulation medium of industrial and residential boilers. Many boilers contained thick slabs of asbestos-lined “block” insulation in boiler fire boxes or around the furnace walls and tube banks.

Asbestos was also used to make the following boiler components:

A 2005 survey found most of the 163,000 industrial and commercial boilers in use in the United States were more than 30 years old. These machines were built during a time when industrial manufacturers used asbestos to insulate their heat-generating machinery; the asbestos products are often still in place, causing continued danger of toxic exposure.

Today, boilermakers run the risk of being exposed to asbestos whenever they repair, replace or maintain an older boiler. If boiler workers are not informed of the presence of asbestos in these massive heating systems, or if occupational and health safety practices are not practiced by the new boilermakers, they are at risk of developing asbestos-related diseases including asbestosis, lung cancer and mesothelioma. Boilermakers, boiler tenders, pipe fitters and others who worked in asbestos riddled engine rooms now experiencing mesothelioma symptoms should be aware of their legal options.

Simmons Hanly Conroy is a mesothelioma law firm committed to helping individuals and families devastated by asbestos exposure and mesothelioma. For over a decade, our attorneys have fought for the rights of men and women exposed to asbestos while performing their jobs.

If you believe you or a loved one may be experiencing mesothelioma symptoms due to boilermaker asbestos exposure, fill out the form below to schedule a free legal consultation with one of our experienced asbestos attorneys.

Attorney Taylor Kerns is a shareholder at Simmons Hanly Conroy who focuses his practice on asbestos litigation. He oversees a team of attorneys and legal staff, who represent individuals across the country suffering from asbestos-related diseases. He has helped secure millions of dollars on behalf of individuals and families impacted by mesothelioma and other asbestos-related diseases.