For 43 years, John did residential, commercial and industrial construction work, during which he was routinely exposed to a toxic mineral called asbestos. Many companies failed to warn workers about the risks of asbestos exposure or provide protective gear.

As a result of his exposure, John was diagnosed with an aggressive cancer called mesothelioma several decades later. By working with Simmons Hanly Conroy, John and his wife Dee were able to hold the companies responsible for his exposure accountable and secure financial compensation for treatment. 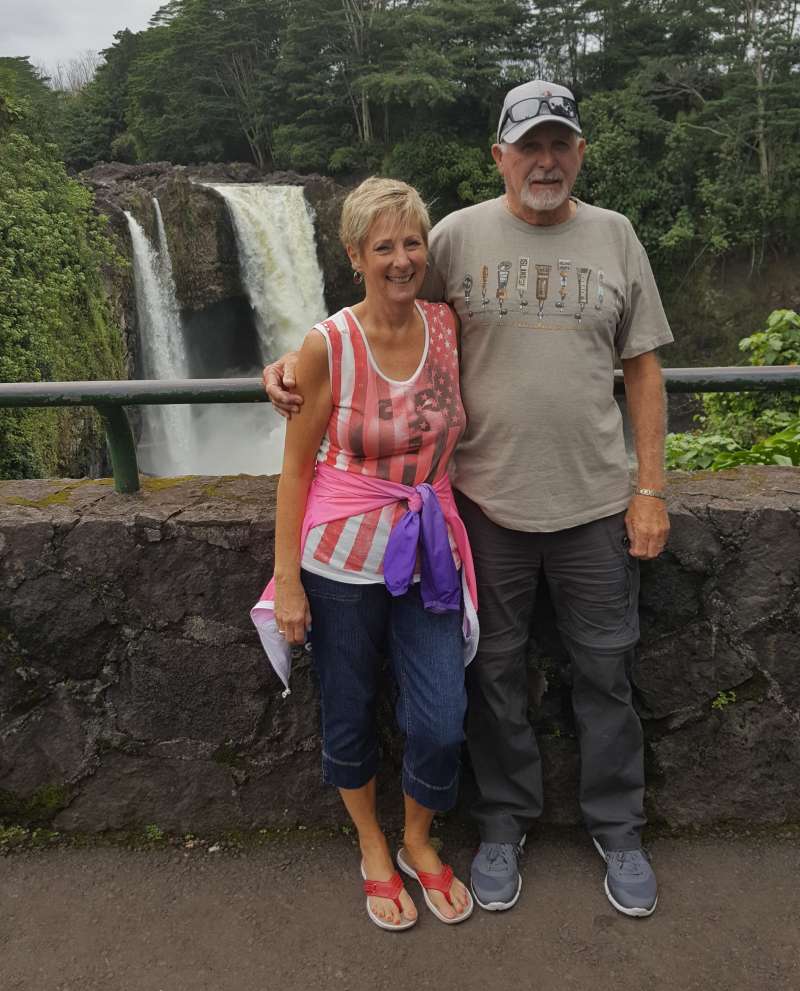 Blindsided by a Mesothelioma Diagnosis

In July 2019, John woke up having trouble breathing. Normally, he had a pretty active lifestyle and would go for a bike ride, golfing or riding a side-by-side (off-road vehicle) with Dee. That morning, however, something just didn’t feel right to him.

In addition to being unusually tired and weak, Dee says John was also very pale, so she convinced him to get checked out. They went to a nearby urgent care clinic, where an X-ray of John’s lungs was taken.

Alarmingly, John’s left lung wasn’t even visible in the X-ray images because it was covered in more than two liters of fluid. “They were amazed that he was even able to breathe, period,” Dee said. “They drained it and just told us we needed to follow up with our family doctor. That’s where it all started.”

From there, their family doctor immediately referred him to an oncologist. On August 19, 2019, John was diagnosed with malignant mesothelioma.

“They did a CT Scan. Then we went in for the results. That’s when he just said, ‘You have stage 4 mesothelioma, John.’ We were shocked.”
– Dee, John’s Wife

The doctor explained that mesothelioma is caused by asbestos exposure. It was then that they made the connection between John’s diagnosis and the decades he spent working in construction.

As the couple processed the devastating news, John began to get angry, thinking about how manufacturers continued to make asbestos-containing products after knowing they would harm people. It began to sink in that these same products would be what ended John’s life. John and Dee knew they would file a mesothelioma lawsuit the very day after his diagnosis, just as soon as the initial shock wore off.

After going through the legal process, the couple’s advice to other mesothelioma victims is to file a lawsuit. Suing asbestos companies can help get justice for those harmed and force powerful corporations that put profits ahead of people to pay for what they did.

“We filed a mesothelioma lawsuit to hold companies accountable. … I don’t know how these people slept at night, knowing people were being exposed to asbestos, poisoning their bodies. They need to pay anyone that’s been affected by this.”
– John, Mesothelioma Patient & Firm Client

Additionally, filing a mesothelioma lawsuit can create financial security. Some mesothelioma families can even pay off entire mortgages or build brand-new homes.

“You can take care of your children, whether they’re children or adults,” John explained. “It’s just nice to know that there’s something there for them.”

When his asbestos settlement checks began coming in, John knew he would fulfill his lifelong wish of getting a Corvette. He’d had one earlier in life and always told himself that if he ever had money again, he’d get another one. Fulfilling this wish is — of course — bittersweet.

“I’ve always told my friends that I’ll trade you any day,” John said. “You guys can have all my money, all my toys, if I could have my health back.”

Although mesothelioma is caused by asbestos, linking the disease to a specific source is complicated. This is because symptoms don’t usually appear until 10 to 50 years after exposure. Pinpointing an exact time and place going back decades into the past can be difficult.

The puzzle gets even more challenging for mesothelioma patients who worked in the construction industry. Since it was considered the perfect construction material, asbestos had been widely used for decades. It was often added to other construction products to make them fireproof, lighter and stronger.

The combination of the long latency period for mesothelioma to form and the widespread use of asbestos makes unraveling the source of exposure complex.

This was especially true for John, who worked in residential, commercial and industrial construction for 43 years. He worked as a laborer, miner and welder in addition to doing remodeling and siding work.

“I was exposed to asbestos through sheetrock, the mud, through gaskets in piping, through respirators, the cartridges, the filters had asbestos in them — all through my career,” John said.

As difficult as it can be, isolating the source of asbestos exposure is key in mesothelioma claims. After all, it is the only way to know which asbestos companies should be held accountable.

Without knowing who is responsible, it is impossible to know who to sue. This is why it is critical to work with a lawyer from the best mesothelioma law firms in the country.

During her first phone call, Dee recalls being very emotional, still processing the shock of her husband’s disease — but the woman she spoke with was kind, professional and compassionate. Although the call lasted over 30 minutes, Dee never felt pressured to rush through her questions or responses.

Within a couple of days, a case investigator was at their door, ready to speak with the couple about John’s work history, help them fill out forms and collect a copy of the mesothelioma diagnosis report.

From there, the couple learned they would work directly with mesothelioma lawyer Todd Gampp. When they got the call from Todd, they clicked right away, and the couple set a date for a home visit to go through everything one-on-one. “I am dedicated to my clients and their cases from the moment I walk into their homes and listen to their courageous stories. I work hard to help them secure positive results.”
– Shareholder Todd Gampp

“Filing the lawsuit was easy because Todd made it easy. We didn’t have to do anything,” John said. “We just had to be here when he was and talk to him, so he could explain to us exactly how the process worked.”

As they moved through the legal process, John’s relationship with Todd only got stronger. It wasn’t long before they felt like they were working with a friend instead of a lawyer.

Worrying less over the lawsuit allowed the couple to focus on what was most important — getting John treatment. This aspect was made easier by the mesothelioma financial compensation the firm was able to secure for the family.

Life as a Pleural Mesothelioma Survivor

John’s mesothelioma treatment began with chemotherapy every two weeks. While the sessions only took about an hour, it would take John 7-10 days to recover.

During that time, he didn’t have the energy to do anything but sit at home. The toll the disease and its treatment took on John has been physically and emotionally devastating.

“Asbestos is poison, and it’s a prescription for death.”
– Dee, John’s Wife

Fortunately, three years later, John says he is finally feeling well again. He’s back to playing golf twice a week — and back in the side-by-side, spending time with his snowbird friends.

Help for Mesothelioma Patients and Their Families

As a national mesothelioma law firm, Simmons Hanly Conroy is dedicated to helping patients and families affected by asbestos exposure get justice.

Receiving a mesothelioma diagnosis is something no one can ever be prepared for. For most victims, the cancer had been silently developing for decades — but the diagnosis can be a complete shock that comes out of nowhere.

In addition to being blindsided, mesothelioma patients are often given a bleak outlook with less than a year to live. For many families, filing a lawsuit is the best path forward as it can help patients afford the high costs of treatment.

“Hiring Simmons Hanly Conroy was the smartest thing we ever did.”
– John, Mesothelioma Patient & Firm Client

Contact us today to learn more about how we can help you and your family.