Julie grew up in the 1970s, a time when inexpensive and versatile asbestos was still widely used — even though the companies that produced asbestos-containing products knew it was dangerous.

Manufacturers of asbestos-based products were aware of the health risks their goods posed as early as the 1930s.Despite this increased awareness, however, corporations continued to manufacture and sell asbestos products, knowingly putting financial gain before workers’ and consumers’ lives.

Julie’s dad, Greg, worked as a commercial electrician for IBEW Local 1 in St. Louis for 40 years. He would return home covered in asbestos dust from installing electrical systems in commercial facilities and power plants.

“My father would come home from work, and I’d run up and hug him. He was covered in dust from a worksite. We didn’t know that, that included asbestos dust. When my mother washed his clothes in the laundry room that doubled as my playroom and shook out the dust, she had no idea she was spreading asbestos fibers throughout our house.” 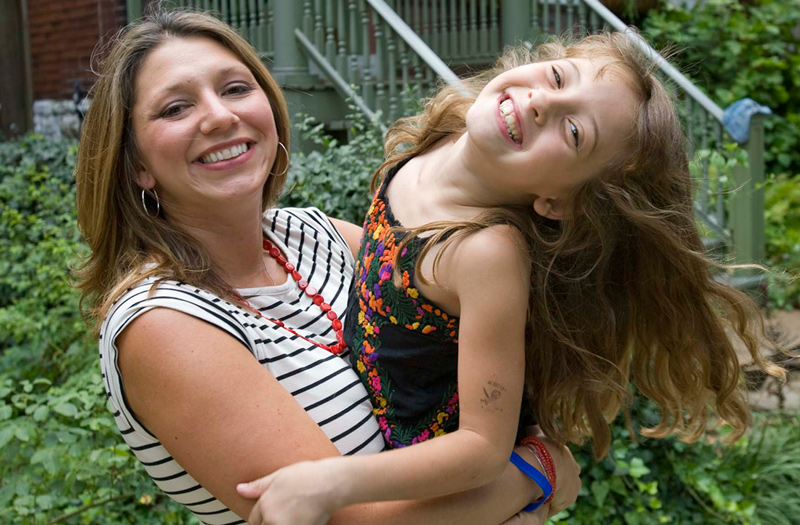 When she was older, Julie began experiencing digestive problems and constipation. Imaging tests revealed a mass in her pelvis. Without performing a biopsy, doctors assumed it was ovarian cancer.

In August 2006, during surgery to remove the mass, doctors were surprised to learn that the mass was actually peritoneal mesothelioma, which develops in the abdomen. Her daughter Madeline was only 3 years old at the time of Julie’s mesothelioma diagnosis.

Mesothelioma has one of the highest mortality rates among all cancers and has no cure. Despite this fact, Julie has far outlived her initial prognosis. Her cancer is now considered stable, allowing Julie to spend time with her family and serve as an advocate for other mesothelioma patients.

Though mesothelioma was once considered a disease affecting mostly men, the number of women diagnosed with it is growing each year. This is because women are more susceptible to secondhand asbestos exposure, which usually occurs when a family member (such as a husband, brother or son) brings home asbestos on his clothes, shoes or work equipment.

Mesothelioma attorney Ted Gianaris explains that secondhand, or take-home, exposure tends to be less concentrated than exposure in the workplace.

“It seems as though the data shows that people who had lower exposures take longer to develop mesothelioma, so we’ve seen a lot of family and children of workers exposed in the home, people exposed as bystanders, and we didn’t see that as much 10 years ago.” After her mesothelioma diagnosis, Julie remembers being told to talk to a lawyer to make sure her affairs were in order. Her initially grim prognosis shattered her world, but Julie decided to fight back. She sought the best treatment possible, frequently traveling across the country for major surgeries.

As if a cancer diagnosis wasn’t bad enough, Julie then became burdened by insurance companies who tried to deny her medical coverage. She was being told that her treatments were “experimental,” and her insurers refused to pay her claims. She was then told that she was out-of-network. While she fought for her life, Julie’s medical bills increased.

With her young daughter in mind, Julie refused to give up. She connected with the asbestos prevention community, hired the mesothelioma law firm Simmons Hanly Conroy and fought hard for her right to life-saving treatments.
Companies that made asbestos-containing products have known the dangers of asbestos since the early 1930s, but many decided against warning workers. To these companies, Julie and the thousands of others whose lives have been devastated by mesothelioma and other asbestos-related diseases are nothing more than a number.

In an effort to hold accountable negligent asbestos companies, Julie worked with the asbestos lawyers at Simmons Hanly Conroy to file a lawsuit. With the compensation our lawyers secured on her behalf, Julie has been able to travel to New York over 20 times for surgeries, chemotherapy treatments and other procedures.

“Simmons Hanly Conroy represented me. I love them. […] They have been incredibly helpful and supportive to me, far and above beyond any expectations anybody could have of legal representatives.” Fighting Mesothelioma One Day at a Time

Julie has had five surgeries since her initial diagnosis, each generally lasting 8-12 hours.

“They split me from breastbone to pelvis, remove as much tumor as they can, infuse me with a heated chemotherapy wash for two hours, before they close me back up with 64 staples, and then allow me to recuperate in the hospital for 10 days.”

Her approach in the fight against mesothelioma has been to take each day and each obstacle one by one.

“You’ve got to break it down to whatever is directly in front of you and just do that. You can’t think about everything you have to do, or it becomes far too overwhelming.”

A look back at her story demonstrates just how courageous a fighter Julie truly is:
• 2005: Her father passes away from asbestos-related lung cancer.
• 2006: She is diagnosed with mesothelioma at age 35 and given 6-12 months to live.
• 2009: She runs in Simmons Hanly Conroy’s first annual Miles for Meso 5k road race, continuing to run each year thereafter. She also organizes a Miles for Meso 5K race in St. Louis, Missouri.
• 2009: Thanks to Julie and the Mesothelioma Applied Research Foundation, The state of Missouri and the City of St. Louis pass Mesothelioma Awareness Day proclamations.
• 2010: She is featured in the BBC’s investigative series called “Dangers in the Dust.”
• 2011: She is presented with the Alan Reinstein Award at the Annual International Asbestos Awareness and Prevention Conference for her commitment to education, advocacy and support to countless patients and families.
• 2011: Julie rents a booth and hands out information about the dangers of asbestos at the St. Louis Earth Day Festival in Forest Park.
• 2012: Julie works with the Congressionally Directed Medical Research Program. In her role, she reviews research grant proposals for the perspective of a cancer survivor and determines which projects would be helpful for other cancer patients.
• 2015: Julie speaks to IBEW Local 1, the electrician’s union her father worked for, about the dangers of asbestos exposure.
• 2016: She becomes a 10-year mesothelioma survivor, a significant milestone in her fight. She also joins the Asbestos Disease Awareness Organization (ADAO) in Washington, D.C., to discuss mesothelioma awareness and fundraising for a cure in senate briefings and other leadership meetings.
• 2019: She serves as an ADAO ambassador to support the Alan Reinstein Ban Asbestos Now Act of 2019 introduced in Congress.
• 2020: Julie appears as guest speaker at the 37th Environmental Information Association Conference, held virtually due to the COVID-19 pandemic. Never Giving Up the Battle Against Mesothelioma

To this day, Julie continues to battle mesothelioma. Though her cancer is considered “stable,” she is not cured and must travel to the National Institutes of Health (NIH) in Washington, D.C. so doctors can monitor her disease.

In addition to her own fight, Julie serves as an advocate for other mesothelioma patients. Many people think asbestos has already been fully banned in the United States, but that is not the case.

“I take the frustration and the anger, and I turn it into advocacy and action, because that is all I know how to do. Because while there is a lot grey in the world, I also know that there is right and there is wrong. And making a profit off of peoples’ pain and lives is wrong. And I will not stop until we have a ban on asbestos.”

Since 2006, Julie has visited Capitol Hill many times to meet with political leaders. Her experience highlights the need for the United States to fully ban asbestos. At St. Louis Earth Day Festivals, Julie has rented booths to hand out literature warning about the dangers of asbestos. She has also collected countless signatures demanding a full asbestos ban.

“The asbestos industry does not want you to know that it is still in products. They don’t want those products labeled, because they want to keep everyone ignorant of where it is so they can absolve themselves of responsibility.”

Julie has repeatedly told her survival story to news organizations in an effort to help people see that if the deadly consequences of asbestos exposure can happen to her, they can happen to anyone.

Simmons Hanly Conroy is dedicated to working with clients like Julie, who are dealing with a mesothelioma diagnosis and the potentially devastating financial circumstances that come along with it.

If this story resonated with you and you want to learn more about filing a mesothelioma lawsuit, the attorneys at Simmons Hanly Conroy can help.