Larry grew up in New England, where his father worked in a paper factory for nearly 40 years. With neither one of them realizing the dangers of asbestos, Larry would hug his dad when he got home from work each night.

Larry was told his dad died of emphysema. But after Larry was diagnosed with mesothelioma in 2006, he began to wonder if that rare and fatal form of cancer caused by asbestos exposure is what had actually taken his father.

A Diagnosis No One Can Outrun

Larry Davis was born in the mid-1940s in Connecticut. His father died relatively young; according to his doctors, it was from emphysema brought on by smoking. Because of this, Larry made sure to take great care of himself throughout his own life.

He was a committed runner who set records for his high school track team. Larry maintained a healthy weight and diet well into adulthood, and began running 5K races regularly in his early thirties. He ran his first marathon in 1978.

In 1997, Larry moved to southern Florida, where he launched a business venture, Extreme Eyewear. This is where he met his wife, Carol, who shared his passion for running. Together they competed in races all over Florida and California, including triathlons.

Despite his healthy lifestyle, in 2006, Larry received a mesothelioma diagnosis at 61 years old. The cancer was found in the lining of his lower internal organs. He had run a 5K race just three weeks prior to his tragic diagnosis.

Learning of the Dangers Too Late

Finding out that he had mesothelioma made Larry seriously question his father’s emphysema diagnosis. His dad had worked at a paper company for 38 years, and Larry remembered him coming home covered in asbestos. “I was exposed from the time I was a baby,” Larry recounted in a 2011 interview.

Like most people, Larry didn’t know about the dangers of asbestos exposure until after it was too late. Sadly, Larry Davis — father, husband, runner, activist and fundraiser — lost his six-year battle with mesothelioma on July 2, 2012. He was 67 years old.

Today, his daughter Courtney continues to fight in his memory and for countless others who have needlessly lost their lives to mesothelioma. Secondhand exposure occurs when a person inadvertently brings asbestos home with them on their clothing or other materials, such as work equipment. Like so many of the world’s laborers who are directly exposed to asbestos, these secondhand victims can fall prey to the same fatal diseases.

Because of the 10-to-50-year latency period of many asbestos-related diseases, it is not known for certain when Larry was exposed to toxic levels of asbestos. Since his father and grandfather both worked for a factory, it’s very possible that Larry was exposed as a child by hugging his father when he returned from work.

Larry also felt that when he attended Duquesne University in Pittsburgh, he had been exposed to asbestos through construction projects in his neighborhood and in factories throughout the city. “My clothes would be covered with this white powder on my way to the classroom,” he said.

Mesothelioma attorney Ted Gianaris explains that secondhand (or “take-home”) exposure tends to be less concentrated than exposure in the workplace:

“It seems as though the data shows that people who had lower exposures take longer to develop mesothelioma, so we’ve seen a lot of family and children of workers exposed in the home, people exposed as bystanders, and we didn’t see that as much 10 years ago.” Like many other mesothelioma victims, when Larry was first diagnosed, he was told he had only six months to live. The doctors gave him chemotherapy and radiation in keeping with the traditional approach to mesothelioma treatment. Unfortunately, in Larry’s case, his treatment plan seemed to cause more problems than benefits.

Larry lost about 60 pounds in a month. He had five surgeries, almost died from infections, spent six months in bed waiting for a surgery incision to heal and had to use an ostomy bag for a year. Eventually, the pain and discomfort became so severe that Larry decided to defy his doctor’s orders and no longer undergo radiation treatment or take chemotherapy drugs.

Once he felt strong enough, Larry began the one therapy that made sense to him — he went running again.

“They gave me a death sentence. I proved them wrong. I did the opposite of what they said to do, and that’s why I’m still here. Sometimes individuals have to take responsibility for their own well-being.”

Having Family by His Side

Throughout Larry’s mesothelioma treatments, his daughter Courtney was by his side. Although Larry and Courtney’s mother split up when she was young and she lived with her mom, Courtney and her father remained close.

“He was there for everything — sports games, my graduation. He’d come pick me up and we’d spend weekends together.”

From an early age, Courtney ran alongside her dad in various fun runs and 5Ks. She watched him run in the longer road races all over New England and New York.

Due to their bond, it was devastating for Courtney to see her dad wasting away from mesothelioma. But just like they had always done, they kept doing everything together — including fighting Larry’s disease, as well as fighting against the deadly public health threat that is asbestos. 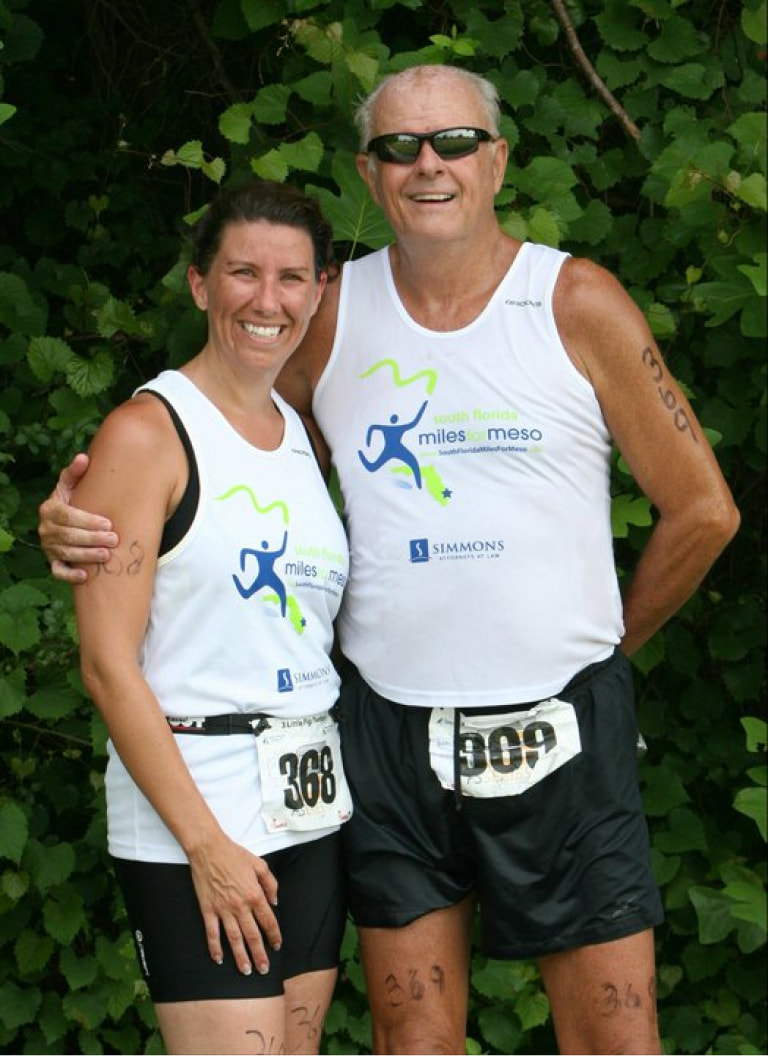 Mesothelioma and the Corporate Cover-Up

Although many think asbestos is banned in the United States, it is not. The toxic material remains legal, despite the well-known dangers of asbestos exposure. It is still used to this day in various applications, particularly in the construction industry.

“I sat with a senator in Washington and asked him to help ban asbestos. He said, ‘We banned it.’ I said, ‘No, you haven’t.’ His aide googled it and said, ‘you know, we almost passed it in ’89, but a federal judge overturned it.’”

Perhaps even more upsetting is that manufacturers of asbestos-containing products have been aware of the health risks as early as the 1930s. However, in an appalling corporate cover-up, companies continued to manufacture and sell asbestos products, knowingly putting financial gain ahead of the lives of workers and consumers.

“As my father deteriorated, I cried when no one could see[,] for him and for this disease that was taking him from me. Something that could be prevented. Something that the U.S. Congress could put a stop to going forward. There needs to be a complete ban on asbestos use all over the world, not just here in America.”

Taking Initiative in the Fight Against Mesothelioma

Despite his harrowing experiences with treatment, four years after his initial diagnosis, Larry was not only running again; he also became an active supporter of mesothelioma organizations, advocating for a total ban of asbestos.

Unfortunately, but understandably, Larry’s mesothelioma diagnosis caused him to lose faith in the American health care system’s ability to treat the disease.

“I first found that the medical profession and hospitals know very little about how to diagnose and treat mesothelioma. My general internal medicine doctor had told me I had a hernia. If you are a woman, usually the diagnosis is ovarian cancer and not until surgery is it determined that you have mesothelioma. There is very little effective treatment available for this orphan disease. And funding for research is almost nothing.”

However, instead of giving up, Larry joined forces with two foundations that have taken on the task of improving treatment options for mesothelioma patients and fighting for a total ban — the Mesothelioma Applied Research Foundation (Meso Foundation) and the Asbestos Disease Awareness Organization (ADAO).

“Larry was a determined warrior and untiring advocate for finding a cure for mesothelioma.”

Larry was named Volunteer of the Year by the Meso Foundation for his advocacy work, including his efforts to bring awareness to politicians who still think asbestos has been fully banned.

He was also a longtime friend and strong supporter of the ADAO, which considered Larry a true hero and presented him with its prestigious Alan Reinstein Memorial Award for his commitment to education, advocacy and support to countless patients and their families. Organizing the Miles for Meso Race/Walk in Florida

Larry spent much of his time fundraising for mesothelioma research and trying to help everyone affected by asbestos-related diseases. Even though he was battling the debilitating disease himself, he took the fight against mesothelioma to the streets and made a difference in so many lives.

“[On Miles for Meso] We are going to have a tribute, but we’re not going to be there to mourn. We’re here to get on with life and come up with solutions, because we’re not getting any help from politicians and the government.”

Larry Davis kept running right up until the end. In 2011, after completing a Father’s Day triathlon with his daughter, Larry went in for a major surgery to remove some large tumors. Tragically, the surgery was not as successful as his family had hoped, and Larry passed away about a year later.

Over the course of his six-year battle with mesothelioma, the cost of Larry’s medical treatment grew seemingly insurmountable. Travel costs for visits to a cancer specialist can add up quickly, not to mention the chemotherapy drugs, radiation, and surgical procedures. Thankfully, Larry reached out to Simmons Hanly Conroy, and through legal action, he and his family recovered the compensation they needed to pay for all the medical bills that their insurance company would not cover. Simmons Hanly Conroy is dedicated to working with clients like Larry, who, through no fault of their own, are forced to deal with a mesothelioma diagnosis and the potentially devastating financial circumstances that come along with it.

Since 1999, our asbestos attorneys have been supporting and fighting for the families of mesothelioma victims like Larry. We have over 250 employees, including more than 60 experienced mesothelioma lawyers, who are deeply committed to helping our clients at every stage of their cases.

We’re passionate about helping asbestos victims and their families get the compensation they may deserve. Get a free consultation today to learn more about how we may be able to help you.

Get a Free Consultation Today