Matthew Michael (Mike) Mattmuller grew up in Ohio, where he was active in sports, band and academics. After graduating high school in 2000, Matt went on to study at West Virginia University, majoring in civil engineering. He graduated from WVU in 2004 and moved to Maryland, where he worked for several engineering firms. It was there that he met Jessica, the love of his life, whom he married in 2010.

In 2011, with his whole life ahead of him, Mike began to experience what he thought was simply shortness of breath — but his symptoms turned out to be indicative of something much worse. At the young age of 29, he was tragically diagnosed with the rare and aggressive cancer known as mesothelioma.

Sadly, after fearlessly fighting the disease for more than eight years, Mike Mattmuller lost his battle with mesothelioma on April 14, 2020, at just 38 years old.

The Shock of Their Lives: A Mesothelioma Diagnosis

In addition to the shortness of breath he had in 2011, Mike also began to experience some pain in his lower back, which brought him to an urgent care facility for an X-ray. He never imagined that this exam would be more than just a precautionary tool to rule out anything serious. Instead, when he received his test results, Mike was informed that he had cancer.

Adding to this devastating news, the doctors told Mike that they didn’t know what kind of cancer he had. It wasn’t until another month had passed that pathologists were able to determine that Mike had mesothelioma, a fatal type of cancer linked with asbestos exposure.

The onset of mesothelioma tends to be subtle, and doctors themselves sometimes have trouble distinguishing initial mesothelioma symptoms from those of other common ailments like the flu.

Even more surprising than the cancer diagnosis itself was the fact that this particular type of cancer usually affects people who are at least twice as old as Mike.

“At first, we were in total shock and denial. Mike was 29 years old at the time… How could he possibly have this weird disease that affects older folk?”

Fighting Back Through Aggressive Mesothelioma Treatment

While it was tragic that Mike received a deadly diagnosis at such a young age, he and Jessica became determined to use the uncommonly early diagnosis to their advantage. Because Mike was young and otherwise-healthy, his body was better equipped to handle more invasive surgeries for which older, more frail patients are not good candidates.

With the financial compensation he secured by taking legal action, Mike was able to undergo costly mesothelioma treatment that led to incredible progress.

A timeline of Mike’s mesothelioma diagnosis and treatment:

Mesothelioma has one of the highest mortality rates among all cancers, and there is no cure. But through aggressive mesothelioma treatments, Mike far outlived his initial prognosis. The Importance of Staying Positive

According to Jessica, once she and Mike moved past the denial and anger stages, they realized they had to form a plan. After four rounds of chemotherapy, the couple went to Boston to meet Dr. David Sugarbaker. This is where Mike received his extrapleural pneumonectomy.

Post surgery, Mike became cancer-free. The Mattmullers attribute the success of Mike’s treatment to staying positive and believing in their future together. In fact, in the summer of 2016, Mike and Jessica welcomed a beautiful new addition to the family — their first child, a daughter, Riley Jean.

Becoming Fierce Advocates for a Ban on Asbestos

Like any parents, the Mattmullers’ top priority was keeping their child safe, happy and healthy. Given Mike’s experience with mesothelioma, one of the many ways that he and Jessica chose to protect their child was through cancer prevention. The couple dedicated their lives to fighting mesothelioma on a national scale by promoting research toward a cure and by advocating for the ban of asbestos.

“Going on six years now, my husband has been battling mesothelioma. Our newborn baby girl needs her daddy — and for asbestos to be banned.”

Mike became a volunteer for the Asbestos Disease Awareness Organization (ADAO) after his diagnosis. He held the position of ADAO Eastern Co-Regional Director, sharing his story at congressional staff briefings; was a Global Asbestos Awareness Week (GAAW) ambassador from 2014-2020; and was an honoree and speaker at ADAO’s 2017 International Asbestos Awareness and Prevention Conference, where he received the prestigious Alan Reinstein Award for his commitment to asbestos and mesothelioma education, advocacy and personal support. 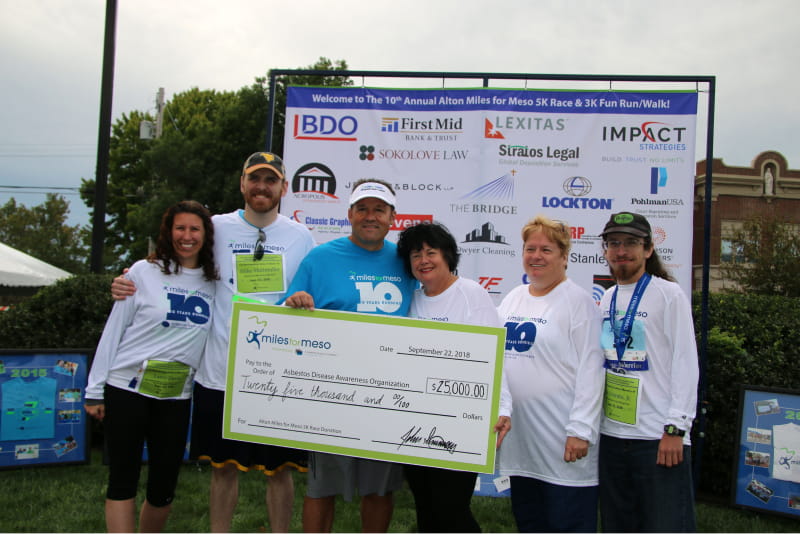 Mike also served as a Mesothelioma Warrior Virtual Team Captain for the 2016 Miles for Meso 5K Race, helping to show support, increase awareness and raise funds for research toward a cure. Jessica was a team captain, too, and — as a graphic designer by trade — she helped to lead ADAO’s awareness campaigns in new creative directions.

Bringing Riley into the world, Mike said, gave the couple fresh determination to protect the future generation from the dangers of asbestos. Together with their daughter, Mike and Jessica became a huge source of hope and support for the ADAO community and other mesothelioma warriors and their families.

“Why should I have to worry about my newborn baby girl getting mesothelioma? [Asbestos] needs to be banned immediately.”

Knowing that they needed to plan for the future, Mike and Jessica began contacting law firms to discuss filing a mesothelioma lawsuit. They had talked to several firms, and one had even come out to their home, only to tell them a week later that they couldn’t help. It was then that the Mattmullers found Simmons Hanly Conroy.

“[Simmons Hanly Conroy] helped us out when nobody else would… They care about you, they really do. The people who are working on your case are just as concerned about your well-being as they are about what’s going on with the case. I can’t say enough good things about Simmons Hanly Conroy… They make you feel like you’re in good hands. And they honestly make you feel part of a family.”

Once the team at Simmons Hanly Conroy determines that you may have a case, you will get a home visit at no cost to discuss specifics. During this visit, your asbestos team will get to know you in-person, explain the legal process and go over any documents you may need to sign. After the visit, your trial team will get to work.

Every trial team is led by experienced mesothelioma lawyers who have years of asbestos litigation experience. Additional members of your trial team may include medical experts, investigators, paralegals and support staff.

Together, your trial team works tirelessly to build the backbone of your asbestos case, handling all of the heavy lifting so you can focus on your health and your family.

Supporting Mesothelioma Warriors and Their Loved Ones

Right up until his passing in April 2020, Mike Mattmuller embodied the term “mesothelioma warrior.” He fought this deadly disease with everything he had, staving it off so he could spend more time with his wife and daughter. In doing so, Mike inspired countless other mesothelioma warriors to keep a positive attitude, never give up, spread awareness, work to ban asbestos — and to cherish every moment they have with their loved ones.

Simmons Hanly Conroy’s thoughts and prayers are forever with Mike, Jessica and Riley, who battled with all they had against a mesothelioma diagnosis and the devastating financial circumstances that come along with it. We are dedicated to working with families affected by asbestos-related diseases to ease their financial pain and maximize their time together.

Contact us today to learn more about how Simmons Hanly Conroy may be able to help you and your family. Simmons Hanly Conroy is proud to help those with mesothelioma, asbestosis and other asbestos-related diseases navigate the legal system. Our law firm has recovered more than $8 Billion for asbestos clients since 1999.

To learn more about accessing compensation, get a free legal consultation.