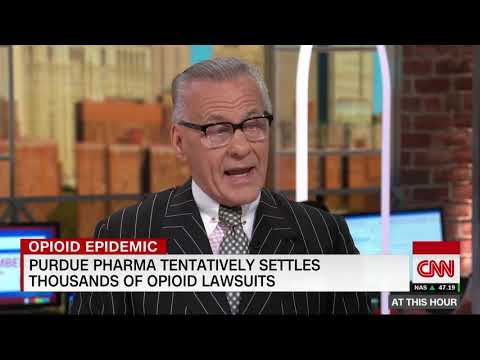 CNN “At This Hour” Host Victor Blackwell welcomed Shareholder Paul Hanly on Tuesday, Aug. 27, 2019 to hear his reaction to the recent $572 million Oklahoma opioid verdict and what it means for the federal opioid multidistrict litigation. Hanly is the co-lead of the National Prescription Opiate MDL pending in Ohio’s federal court.

This verdict is a very positive outcome for all the communities the firm represents for three main reasons, Hanly explained to Blackwell.

“This was important,” Hanly said, “because, for the first time, a court with a full body of evidence before it, looked at both sides of the argument and concluded: A) that there’s an opioid epidemic, B), that it’s a public nuisance and, C) that, in this case, Johnson & Johnson was the cause of the nuisance. So we’re very pleased with the ruling.”

The OK verdict is against Johnson & Johnson and its subsidiary Janssen Pharmaceutical and marks the first time a pharmaceutical company is being held accountable for its role in the opioid epidemic.

Blackwell played a clip of the J&J attorney’s reaction to the verdict, in which she tried to shift the blame to the doctors, patients and the FDA.

The judge sent a strong message with the verdict, Hanly responded and explained the court rejected that argument in the face of the evidence presented to it.

“The fact that the drug is approved by the FDA does not give the manufacturers or distributors a license to make false statements concerning the characteristics of the drug,” he said. “And that’s precisely what the judge in Oklahoma found.”

Hanly further expanded on this point in an interview on The Morning Briefing with Tim Farley on Sirius radio.

“There are many studies out there that make translucently clear that the marketing tactics of companies do have a powerful influence on the prescribing habits of physicians,” Hanly said.

NPR’s “All Things Considered” interviewed Hanly as well about the result, which was significantly less than what the OK state officials asked for in order to respond to the epidemic. However, Hanly pointed out the amount covers one year of damages. He expects the results to continue to grow.

“If you extrapolate that amount across all cases that Johnson & Johnson is facing, you are in the tens of billions of dollars,” he said.