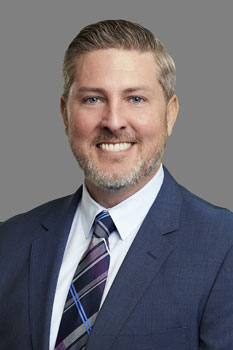 Attorney Donald P. Blydenburgh is a shareholder at Simmons Hanly Conroy. Having joined the firm in 2019, Don brings with him more than a decade of success in trial and appellate courts across the country. He focuses his practice exclusively on asbestos litigation, representing individuals affected by asbestos-related lung cancers and mesothelioma against national and multinational corporations that knowingly made and sold asbestos products without warning. His efforts have resulted in multi-million-dollar verdicts and settlements. He has secured more than $130 million dollars in recoveries for his clients.

Don is attentive to his clients’ needs throughout the litigation process, from initial discovery through deposition and trial.

“I know all too well the devastation and heartache cancer can wreak on a family. I try to take that experience and understanding with me into the lawsuit so that the clients feel supported and protected, from the first meeting in the living room to the trial in the courtroom,” he said. “I believe strongly in our system of laws and its ability to protect and provide justice to those who have been marginalized by large corporations for the sake of profit. Under our system, the individual, no matter who they are, has the opportunity to stand up and show how they have been wronged. I am proud to be an advocate and champion for our clients.”

Don’s litigation experience is as varied as it is impressive. His success has been built on investigating unusual potential exposures and identifying the correct liable defendants, oftentimes involving products previously unknown to contain asbestos. His legal analysis and oral argument skills have led courts to adopt views and legislatures to pass laws protecting the injured individual in states around the country.

Recognized by his Peers

Don has been named a New York Rising Star by SuperLawyers® every year since 2015. He has been recognized as a member of the renowned National Trial Lawyers ‘Top 40 under 40’ from 2016 through 2019 and was honored by the same organization in 2018 and 2019 as one of the Top 10 Asbestos Mesothelioma Trial Lawyers in New York.

Don received a B.A. in economics and political science from Columbia University in 2001 and his J.D. from Brooklyn Law School in 2005. He received several honors as a law student, including selection as a Carswell Merit Scholar and admission to the Dean’s List and Moot Court Honor Society Trial Division. He also served as speaker of the Student Bar Association and chapter president of the Association of Trial Lawyers of America. While at Columbia, he was named the Schwartz Family Merit Scholar for high achievement in academics and athletics (baseball).

Prior to trial law, Don clerked for several courts, including the United States Court of Appeals for the Second Circuit, working on several matters with now Supreme Court Justice Sonia Sotomayor, as well as for Hon. Joan M. Azrack of the Eastern District of New York.

When he’s not practicing law, Don enjoys spending time with his family. He and his wife, Eileen, have two daughters, Reagan and Cora. Don also enjoys golf and describes his game as “not embarrassing.” He has been a dedicated fan of the New York Mets (for better or worse) since birth.