Asbestos Exposure: Nothing More Than a Number When visiting New York for mesothelioma cancer treatments, Julie Gundlach would often spit on the steps of the W.R. Grace skyscraper. The act was a representation of how Julie felt, and still feels, about asbestos companies like W.R. Grace that chose to use asbestos and knowingly poisoned workers and their families.

“I still feel like a great deal of my life was stolen from me,” she said. “2007 might as well of not existed for me. My memories are just blurs of trips back and forth to New York.”

Her daughter, Madeline, turned four that year. Julie missed a lot of moments with Madeline because of the chemotherapy fog and recovery time. The side effects from her treatment plan were worse than the initial symptoms of the disease.

Before her diagnosis, Julie’s symptoms were digestive issues. It wasn’t in her nature to go to the doctor unless something was seriously wrong, so when she finally went, the doctor ordered a CT scan. The results showed a mass in her pelvic region.

Always the realist, she asked the doctor, “It’s ovarian cancer, isn’t it?”

He wouldn’t say for sure, but his serious tone said enough. Within a week she was wheeled into surgery. Afterwards, the doctor told her it wasn’t ovarian cancer.

“What can be worse than the silent killer?” she asked.

Among cancers, mesothelioma has one of the highest mortality rates. The average prognosis is 6 to 18 months. There is no cure and it’s only known cause is exposure to asbestos.

Julie was exposed to asbestos while growing up. Mesothelioma has a latency period, so decades can pass from the time of exposure until symptoms appear.

Julie’s dad, Greg, worked as a commercial electrician for IBEW Local 1 in St. Louis for 40 years. He would return home covered in dust from working in commercial facilities and power plants, installing electrical systems. Every night, his dirty work clothes would go to the laundry room that also doubled as Julie’s playroom.

In 2004, Greg Gundlach was diagnosed with asbestos-related lung cancer. He died in 2005. The next year, Julie was diagnosed.

Companies have known the dangers of asbestos since the early 1930s, but decided against warning workers. Executives shrouded behind the protective identity of a corporation too big to fail did a cost benefit analysis and American workers and their families lost. Companies chose to use asbestos; to mine it, produce it, manufacture it, sell it and remain silent.

“If you have enjoyed a good life while working with asbestos products, why not die from it?” wrote an executive from Bendix, which is now Honeywell, in a 1966 memo to his insurance company.

To the companies that used asbestos, Julie and the thousands of others whose lives have been devastated by mesothelioma are nothing more than a number.

“I’ve made many friends in the meso community and I’m sometimes astounded when I look through my Facebook friend list and count how many people are still there, but they’re dead,” she said.

For the asbestos industry, it was more profitable to sell asbestos and build offices in New York skyscrapers than to protect their employees and consumers. It’s an industry that, to Julie, might as well have been built with “flesh and bone.” 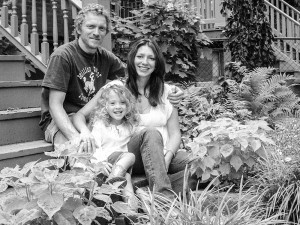 #JoinJulie at the Alton Miles for Meso race. Amplify her voice and others. Help her fight back by raising awareness about the dangers of asbestos and the corporate cover up of those dangers. All proceeds from the Alton race will benefit the Asbestos Disease Awareness Organization and its mission to secure a total U.S. ban on asbestos.