One way Julie Gundlach takes the ‘poison’ from her mesothelioma diagnosis and turns it into something beautiful is by telling her story. Through her story, Julie hopes others will realize the importance of securing a total ban on asbestos.

“I felt like I had to do something, and telling my story was all I really felt like I could do,” she said.

Speaking at the Alton Miles for Meso race is not her only platform.

Since 2006, Julie has visited Capitol Hill six times to meet with political leaders as proof of why the United States should fully ban asbestos. During past St. Louis Earth Day Festivals, she has rented a booth where she passed out literature about the dangers of asbestos and collected signatures demanding an asbestos ban.

In 2011, the Asbestos Disease Awareness Organization (ADAO) awarded her the Alan Reinstein award, which honors those diagnosed with asbestos-related diseases who reach out to their communities to promote public awareness of asbestos exposure and push for its complete global ban.

Most people think asbestos has already been banned in the United States. It’s not. The United States imported 360 tons of raw asbestos for manufacturing and other uses in 2015. This is possible because the 1976 Toxic Substance Control Act (TSCA), the law most people thought would ban carcinogens like asbestos, was overturned in 1989 by the Fifth Circuit Court of Appeals.

Through the work of patients like Julie and advocacy groups like the Asbestos Disease Awareness Organization, change is being made. In June, President Barak Obama signed into law The Frank R. Lautenberg Chemical Safety for the 21st Century Act. This law reforms TSCA and strengthens the U.S. Environmental Protection Agency’s ability to regulate or ban toxic substances like asbestos.

During the signing ceremony, the president specifically mentioned asbestos to explain why the new law was needed.

“…the system was so complex, so burdensome that our country hasn’t even been able to uphold a ban on asbestos – a known carcinogen that kills as many as 10,000 Americas every year,” he said. “I think a lot of Americans would be shocked by that.”

This year proceeds from the Alton race will again benefit ADAO, an organization that has spent 13 years working for a U.S. asbestos ban. Led by president Linda Reinstein, ADAO advocates for victims’ rights, educates law makers and policy shapers and works to spread awareness on the risk asbestos poses to the American public.

“We’ve never been closer to an asbestos ban than we are now,” said ADAO President Linda Reinstein.
“Together—along with our Congressional champions and other allies—we are making change happen!” 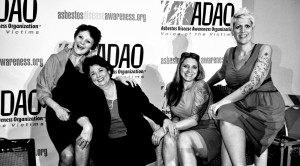 To Julie, TSCA reform was a step in the right direction. Next, Julie wants the EPA to list asbestos among its top priorities for change. #JoinJulie and help support ADAO’s efforts to secure a U.S. ban on asbestos by registering for the Alton Miles for Meso race.