Shareholders Paul Hanly Jr. and Jayne Conroy speak to reporters on the steps of the federal court house building in downtown Cleveland on Oct. 21.

Four drug companies settled for a combined $260 million in the early hours of Monday, Oct. 21 to avoid the first bellwether trial in the National Prescription Opiate Multidistrict Litigation (MDL). As co-lead of the MDL, firm shareholder Paul J. Hanly Jr., was part of the team that hammered out the final details of the deal. Shareholder Jayne Conroy served on the lead trial team that was prepared to try the case. In total, the team secured $325 million in settlements for the two Ohio counties involved in the bellwether trial.

As Simmons Hanly Conroy attorneys and clients left the courthouse, they were greeted by a mass of reporters who conducted dozens of onsite interviews. The settlement made national headlines in several prominent media outlets, including televised segments on CBS News and CBS This Morning. 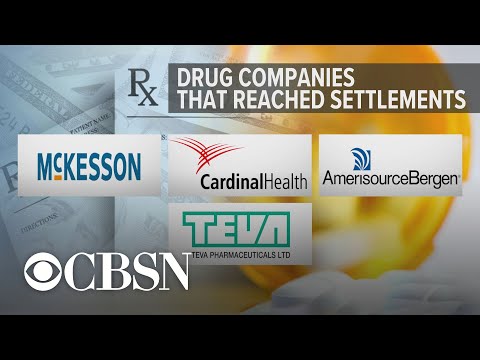 During the televised interview, CBS News correspondent Adriana Diaz spoke with Hanly and the MDL’s other two co-leads about how the deal came together.

“There’s nothing that forces settlement like a trial date,” Hanly told her. “We think it really began to focus [the defendants] and that’s when they made significant movement upward toward a number that we ultimately accepted.”

Diaz then asked about the implications about this settlement for the other 2,700 opioid cases pending in federal court.

Hanly responded, “In each of those cases, the defendants are going to have to carefully weigh their potential risks of going to trial and paying a substantial amount of money, which we believe they did in this case.”

A full list of the coverage from the bellwether opioid settlement is as follows: