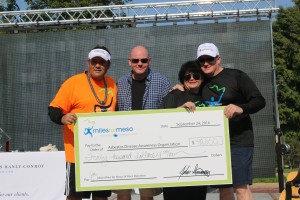 Alton, Ill. (Oct. 23, 2016) – Simmons Hanly Conroy, a national leader in the legal representation of mesothelioma patients and their families, is proud to announce its 8th Annual Alton Miles for Meso 5K Race & 3K Fun Run/Walk on Sept. 24 raised a record $40,000 for the Asbestos Disease Awareness Organization, a national non-profit dedicated to securing a U.S. ban on asbestos and supporting families impacted by asbestos.

More than 1,200 people attended the Alton race at the national headquarters of Simmons Hanly Conroy on Sept. 24. Virtual participants in 8 other states purchased the race shirts and shared photos of themselves wearing the shirts on social media using the hashtag #milesformeso. Since 2009, hundreds more have attended Miles for Meso events in Ohio, Washington, Texas, Florida, Virginia and Indiana.

A total of 31 fundraising teams accounted for this year’s impressive donation. Together they raised $15,000 of this year’s total amount. The top three fundraising teams were recognized during the award ceremony with top fundraising awards. Domani Tripam, a Chicago resident, took home the top fundraising amount with more than $4,000 raised for the ADAO #EndMeso Team. Tripam fundraised in memory of her father, David Dioguardi, a Chicago police officer of 30 years, who lost his battle with mesothelioma in July. 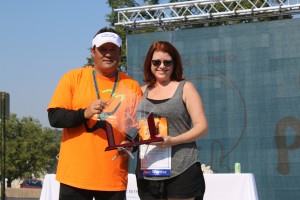 The top five overall men and women finishers received over $2,000 in cash prizes. Dave Janet placed first overall in the men’s division with a time of 16:15. Jackie Pirtle-Hall, of St. Charles, Mo., placed first overall in the women’s division with a time of 17:18. The top three finishers in 5-year age groups also received Miles for Meso custom medals. All children under age 16 received a participation coin as they crossed the finish line.

The Alton event included an activity area for children, a bubble bus, a vendor fair, free food and drinks, and an acoustic performance by singer-songwriter Jordan Zevon, ADAO’s national spokesperson. Zevon is the son of musician Warren Zevon, who died of mesothelioma in 2003 and was posthumously awarded 2 Grammys.

Miles for Meso is an initiative of the Simmons Mesothelioma Foundation that was established in 2009 to raise funds and awareness for mesothelioma, a rare cancer caused by asbestos exposure. Miles for Meso races have been held across the country, from New York to Florida to Washington state and several locations in between. Together, Miles for Meso events have raised nearly $500,000 to benefit mesothelioma research and awareness.