Announced on firm’s 10-year anniversary, name change recognizes leadership in firm’s fight for victims of mesothelioma inside and outside the courtroom. Firm also announces relocation of headquarters to Alton, Ill.

SimmonsCooper LLC, a leading national law firm in the fight against mesothelioma and other asbestos-related diseases, today announced that it is changing its name to Simmons Hanly Conroy LLC. The firm will be known by clients and employees as the Simmons Hanly Conroy. “We feel it is important for our firm’s reputation to formally identify and acknowledge those who our clients, attorneys, and employees rely upon to lead the firm at the highest level,” Simmons said.

Jeff Cooper, who joined the firm in 2000, will remain Of Counsel. “I couldn’t be happier to see the torch passed to my friends Perry, Ted, Mike, and John,” he said.  “We’ve always been a progressive firm, and I’m proud to have played a part in our growth.  It’s exciting to see John continue to look to the future and recognize a new era of leadership.”

The name change and relocation announcements come as the firm marks its 10th anniversary, which is an opportunity to reaffirm Simmons Hanly Conroy’s ongoing commitment to help lead the long-term fight for victims of asbestos-related diseases inside and outside the courtroom, Simmons said. Such cases were the firm’s focus when its doors opened in 1999 and continue to be today. 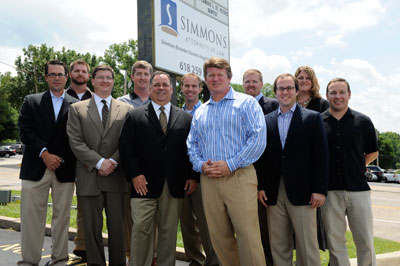 Mesothelioma, a rare cancer caused by exposure to asbestos, and other asbestos-related diseases kill approximately 10,000 people each year.  Since 1999, the Simmons firm has helped thousands of families from every state in the country, including obtaining a $250 million verdict on behalf of a U.S. steel worker – the single largest asbestos verdict in the United States.

“The Simmons firm began with a focus to provide representation to victims suffering from what were and are preventable, life-ending illnesses,” Simmons said.  “Our 10th anniversary is an opportunity to reflect on a remarkable decade, including the incredible contributions of our employees, but much work remains.”

The Simmons Hanly Conroy also is a leading national advocate in raising public awareness and funds for research to find better care, and, ultimately, a cure, for mesothelioma.   The firm has pledged more than $20 million to charitable causes, including $15 million to cancer research, $10 million of which helped build the Simmons Cancer Institute at Southern Illinois University in Springfield.

“We will continue to fight for the rights of victims of asbestos-related diseases and their families, as well as generate awareness, increase education, and help raise funds for research to find better care and, hopefully. a cure for mesothelioma.”

The Simmons Hanly Conroy is a leading national law firm in the fight against mesothelioma. With offices in Illinois and California, the firm has represented thousands of patients and families affected by mesothelioma from all across the country. The Simmons Hanly Conroy is passionate about improving the lives of victims of mesothelioma and asbestos-related illnesses and has pledged over $15 million to cancer research. The firm also has practice areas in intellectual property, pharmaceutical litigation, and business litigation.