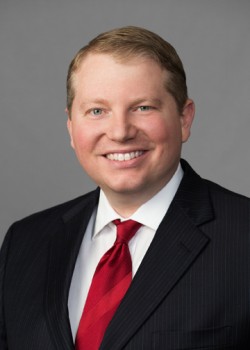 Attorney Michael P. Hickey is an associate at Simmons Hanly Conroy, where he focuses his practice on helping individuals and families impacted by asbestos-related diseases like mesothelioma. His attention to detail has helped secure millions of dollars in verdicts and settlements for his clients.

Like many of the firm’s attorneys, Michael grew up in a blue-collar home. His father was a career electrician. Michael, himself, has a background in construction, allowing him to further connect with his clients.

“When working on cases, I recognize the products listed,” said Michael. “They are products that my own family has touched – that I have probably touched.”

Prior to joining the firm, Michael represented victims who suffered from injuries caused by the negligence of others. He also spent time working as an Assistant State’s Attorney in St. Clair County, Illinois, where he served as lead trial attorney for more than 200 trials. Michael’s experience includes cases that garnered national media attention, making him skilled at handling stressful situations when litigating against national corporations.

“Above all else, what I like most about my job is being able to help others,” Michael said. “These are good, hardworking people who just don’t deserve any of the pain they received for just trying to provide for their families and put food on the table.”

Michael also co-leads the firm’s FELA practice, which helps railroad workers navigate the FELA litigation process and receive the compensation benefits they and their families deserve.

FELA stands for the Federal Employers’ Liability Act and is a federal law enacted in 1908 to protect and compensate railroad workers who were injured on the job. It covers almost any injury – from a mesothelioma cancer diagnosis to a wrongful death – suffered by a railroad employee who is injured while on the job.

Michael has extensive experience helping railroad workers who have been injured on the job, having litigated his first case against the railroad while working as a prosecutor more than 10 years ago.

Filing a FELA lawsuit differs from workers’ compensation claims because with the FELA, Michael must prove that a railroad was negligent, not just that the employee was injured at work.

Michael is passionate about the work he does for his railroad clients because he comes from a long line of railroad employees. Multiple family members of his have been involved with the railroad since the early 1900s when they worked as firemen shoveling coal on steam engines.

Michael received his B.A. in Political Science from the University of Illinois Urbana-Champaign. He earned his J.D. from the John Marshall Law School in Chicago and is licensed to practice in Illinois and Missouri.