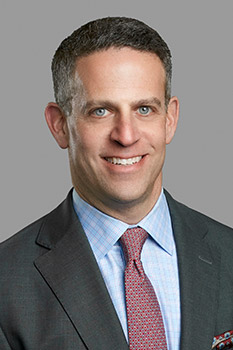 Randy S. Cohn is a shareholder at Simmons Hanly Conroy with over 20 years of legal experience. He has been with the firm since 2004. Randy supervises a team of attorneys and legal staff who annually litigate more than 50 mesothelioma cases throughout the United States. Over the course of his career, Randy and his team have represented hundreds of families and individuals harmed by mesothelioma and secured hundreds of millions in mesothelioma settlements and verdicts on their behalf.

One notable case included a $2.86 million verdict in Delaware for the family of a factory worker diagnosed with mesothelioma. Michael Galliher lost his battle with mesothelioma after retiring from a 40-year career at a plumbing fixture factory to spend more time with his grandchildren. During his day-to-day work, he had used a talc powder to finish the fixtures.

During a hard-fought legal battle, Randy and his legal team proved the talc powder Mr. Galliher used during his job was contaminated with asbestos. They presented scientific evidence during trial that showed the talc supplied by RT Vanderbilt was a fibrous asbestos-containing talc that caused Mr. Galliher’s mesothelioma. As a result, the jury awarded the family what still stands as one of the largest asbestos verdicts against a single defendant in Delaware.

Randy and his team have taken several cases to trial in recent years, and many cases settle during the trial process.

A listing of his recent results includes the following:

“There’s no better feeling than helping people whose lives have been devastated by mesothelioma,” Randy said about the results he’s secured for his clients.

Randy’s clients are his number one priority and the reason he loves his job as an attorney. “When I walk into a deposition, I know I’m the only one who is standing up for the client, the only one representing them,” Randy said.

One recent client was a retired U.S. Air Force plumber and pipefitter, diagnosed with mesothelioma in 2018. While building a playground for his grandkids, he had become short of breath and went to the doctor to discover he had cancer. Randy and his legal team determined that the man’s work throughout Air Force bases, in power plants, boiler rooms and barracks, as well as his later work as a pipefitter exposed him to asbestos.

After an exhaustive discovery process, Randy and his team prepared the case to go to trial. During the early stage of the trial, the final defendants agreed to settle for significant settlements. Thanks to Randy and the firm when the man ultimately passed away from the disease, he rested easy knowing he had provided for his family and grandchildren.

Randy has experience helping workers who have been exposed to asbestos through their work in a variety of professions, including the Navy, manufacturing, construction and automotive industries.

A few years ago, Randy represented a Texas resident and former U.S. Navy mechanic named Jim who had been diagnosed with mesothelioma. Jim was exposed to asbestos during his career in the Navy. His job required expertise on the machinery in the ships’ engines and boiler rooms. Asbestos was used to insulate equipment such as valves, pumps, turbines and other machinery. Asbestos gaskets and packing was also used on most of the same equipment.

When Randy took Jim’s case, he and his wife were in debt from overdue mortgage and doctor bills. Randy and his team worked quickly, and within months, Jim received a settlement to help pay off his mortgage. Jim passed away just after his 57th birthday, but Randy was ultimately able to obtain financial security for Jim’s family.

The recovery results in each case vary based on the facts of the case, and it’s not uncommon for cases to present unique challenges. In one particularly complicated case of Randy’s, a man had spent his entire career as an insulator at a refinery. He died before being diagnosed with mesothelioma, which was found during an autopsy.

Because the man had passed away and his family did not know his complete work history, this presented a significant challenge for Randy and his team. Unfazed, they dug in and completed an exhaustive investigation into his work background. They located the man’s co-workers who confirmed that the man had worked with asbestos-containing chemical piping. The case settled mid-trial for several million dollars for the family.

“Each client is going to get personal attention and compassion,” Randy said. “My team is not going to give up on a case until every rock is overturned and every avenue investigated.”

Randy graduated from Indiana University in 1998 with a degree in political science. He earned his J.D. from Chicago-Kent College of Law in 2001 and is licensed to practice before the Supreme Court of Illinois and Missouri, as well as before the United States District Court for the Northern District of Illinois.

Randy speaks at conferences for the legal industry, where the topics concern take-home asbestos exposure and other best practices for litigating asbestos cases.

“I think the firm has been ahead of its time with the landscape of asbestos litigation, and I think that’s one of the most important aspects of our results,” Randy said.